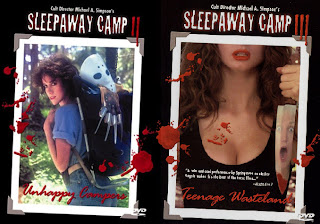 The first Sleepaway Camp (1983) was previously covered in this blog (you can find the original post here).  But just this week, a video popped up on YouTube by AdamTheWoo revisiting the filming locations.  You can check out the video below:

At the beginning of Sleepaway Camp III, Angela runs down Maria with a large Mack truck and steals her identity.  In this scene, the truck is shown driving down Forsyth St in downtown Atlanta, Georgia, near the intersection of Mitchell St.  The coordinates below will take you to the location of the stoop where Angela is seen sitting when the bus picks her up for camp (see picture 4).  The alley where Maria is killed is right beside it, just to the right.  The white wall which reads "Angela Is BACK!" is just to the left.
Location: Atlanta, GA
Coordinates: 33.751977, -84.394213
Visible on Street View: Yes
Links:
Southern Spaces
Tell Mw All About Your Day
Flickr

Both Sleepaway Camp II and Sleepaway Camp III were filmed back-to-back at Camp Younts in Waco, Georgia.  For the second film, some scenes were filmed at Lakewood Studios in Atlanta (such as the interiors of the abandoned cabin where Angela keeps the bodies).  But a majority of both movies were filmed at the camp.  Rumors on set were that the camp was haunted, and a few of the cast and crew claimed to have had strange experiences.  The camp had been abandoned for years before the production got there. The camp was slated to be torn down, and bulldozers were on site during the filming of the third film, waiting for the production to wrap.

In addition to the Sleepaway Camp location video, another video was posted on YouTube this week revisiting Camp Younts from Sleepaway Camp II and III.  You can view the video above.  The video shows that a few of the buildings did survive.  All that is left of the main lodge is the chimney.  The swimming pool from Sleepaway Camp II is surprisingly still there.  The dock at the lake from Sleepaway Camp III has been removed.
Location: Bremen, GA
Coordinates: 33.682711, -85.178802
Visible on Street View: No
Links:
Sleepaway Camp Films (Interview with Kyle Holman)
YMCA Atlanta
Posted by Another Horror Blog at 2:19 PM